Speed
1
Glide
2
Turn
0
Fade
0
Recommended for
Beginner Intermediate Advanced
Disc golf's straightest putter! A straight putter with a great and familiar feel in our alpha-solid plastic. Check out the Kickstarter for more information! Welcome to the kickstarter campaign for the Hydrogen putter made by new Danish disc golf company, Løft Discs. Hydrogen is a putter for both putting and short range driving in disc golf. The design is optimized virtually through our cutting-edge flight path simulator to create the straightest small diameter putter possible within the Professional Disc Golf Association standards, while still offering great grip comfort for both putting and driving. Distance in meters The flight of the Hydrogen...

Available in Other PlasticsView All Hide All

Check out the Kickstarter for more information!

Welcome to the kickstarter campaign for the Hydrogen putter made by new Danish disc golf company, Løft Discs.

Hydrogen is a putter for both putting and short range driving in disc golf. The design is optimized virtually through our cutting-edge flight path simulator to create the straightest small diameter putter possible within the Professional Disc Golf Association standards, while still offering great grip comfort for both putting and driving. 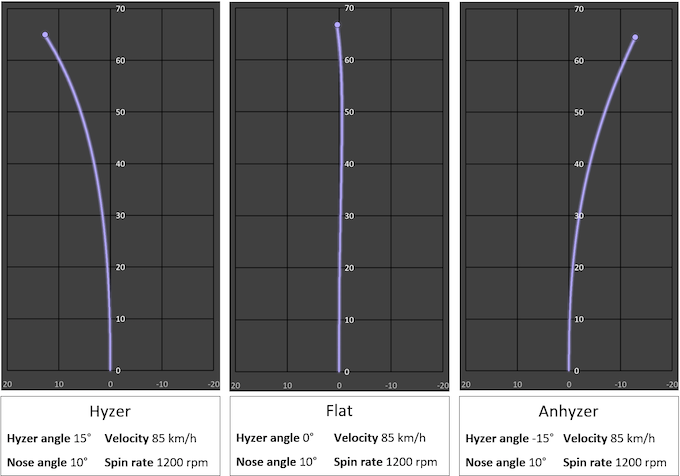 The flight of the Hydrogen is truly unique: Being a very low speed disc, it can hold an anhyzer for any shot between 30 and 90 meters (100 and 300 ft) without neither turning over or flattening out. Likewise, on a hyzer, it will hold the line without flipping up or hyzering additionally. Throw it flat, and watch it go straighter than any other disc you have ever thrown! This is why the disc has the flight characteristics of Speed 1, Glide 2, Turn 0, Fade 0.

The exact same properties carry over when putting. With the hydrogen you don’t have to compensate for your putter being too overstable and you don’t have to worry about it flipping over in a headwind putt. Additionally the disc has a rather low glide, ensuring that it will drop to the ground fast in the rare case that you miss the target.

Hydrogen is designed to hold it's line as well as possible within the standards of the PDGA - but not at any cost. Moving the weight of the disc as far away from the middle as possible is one of the ways to make a disc fly straight, so in theory a large diameter disc turns and fades more slowly than a small diameter disc. But we wanted to make sure that the disc made sense to use as a putter, so comfort would always have to be a priority. We wanted to maintain the excellent comfort that small diameter putters have. And on top of that, a small diameter also serves the purpose of lowering wind resistance, lowering glide, and most importantly: Making it easier to hit and stay in the basket! So within this framework, we optimized the straightness of Hydrogen with four key physical features: 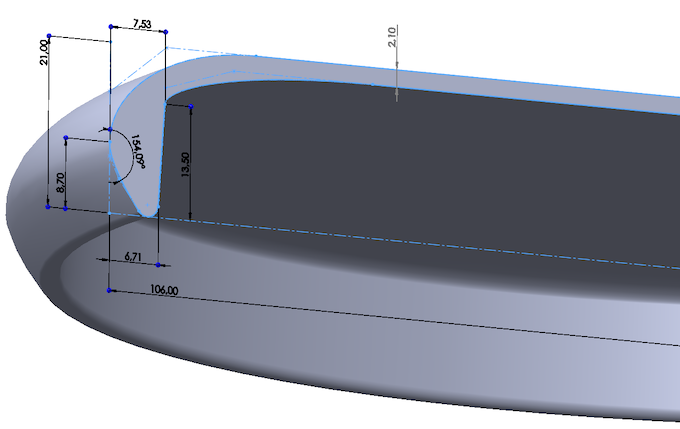 The flight plate is very thin towards the middle, thickening towards the outer edge of the disc. This moves mass away from the center, and also makes the disc feel a little more shallow near the rim of the disc.

The rim is very thin and pretty blunt on the outside, which increases drag (ie. lowering the speed) and decreases the overall pitch moment, which means that no matter if the disc is turning or fading, it is doing it more slowly.

The parting line is the line on the outermost edge of the flight plate, which is one of the key parameters to change a disc's stability. This line is placed at the exact spot that gives the most neutral stability possible for the speed Hydrogen is designed to be thrown at, which is rather low speeds. Therefore, you will rarely see this disc fade, unless thrown really nose up. And likewise, you will only see the disc turn when thrown really hard.

The flatness and the shoulder profile of the disc ensures low glide. besides making the disc stay in the air longer, glide also makes a disc drift further to the sides when it isn't flying flat, which is very helpfull in some situations, but for the Hydrogen we wanted the disc to push straight forward, even thrown on a bit of anhyzer - or hyzer.

The disc will be released in two high-end plastic variants. The α-Solid plastic is our most durable plastic. It offers excellent grip for driving purposes, while having a medium stiffness and a shiny surface finish. The β-Solid plastic is our putter-optimized plastic. It is relatively stiff, but still with a great grip and a slightly tacky feel. The Beta plastic beats in quicker, allowing you to have various amounts of wear and tear of the same mold.

Our stamp is based on our logo, which forms the word 'løft' [ˈløfd] meaning lift or levitate in Danish. Our version of the peculiar letter, Ø, that is framing the entire stamp is a recurring reference to our name and to our Danish origins. We deliberately foresee that non-scandinavians will pronounce our name "loft", which correlates nicely to the meaning of the word. 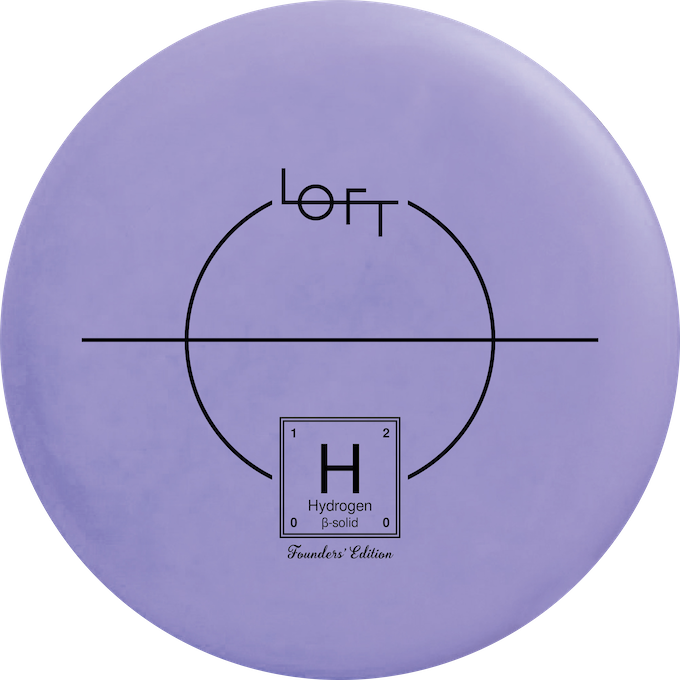 The box with the disc's name is a reference to the periodic table - also refereing to our scientific approach to disc design. Therefore we used the chemical symbol H for Hydrogen, but instead of keeping the atomic number and weight etc. we used the four conventional flight characteristics; speed (top left), glide (top right), turn (bottom left) and fade (bottom right).

We use elements from the periodic table to name all our discs. This has the benefit that discs can be categorized in two axis: Stability and speed. We use the periodic system so you already by hearing the name, can determine whether it is a overstable, understable, high speed or low speed disc. Names for elements with fewer protons in the top of the periodic table are used for low speed discs. Names for elements with fewer valence electrons to the left are generally used for more understable discs.

Disclaimer:  Hydrogen is not understable, even though it is to the left in the periodic table. We just only had 2 choices for the lowest speed. 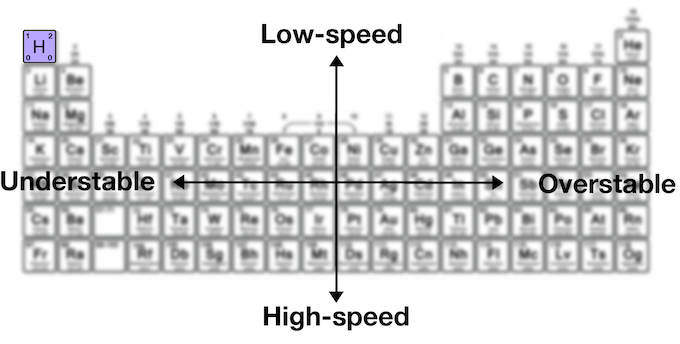